Here at Pirate Attack we want your party to be a swashbuckling success. Below we have provided ten tips to help you ensure your party is worthy of  Captain Blackbeard himself! 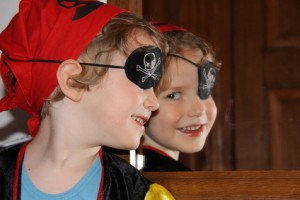 The perfect way to set the tone is with an invitation that doubles as a treasure map. Include an eye patch but also announce there’ll be prizes for the best dressed pirates.

Make your kids’ pirate party fun not terrifying by adjusting the mood, decor and activities to suit their age range.

A reasonable quantity of black sheeting or netting, pirate flags and black balloons can be supplemented by wooden barrels, a treasure chest and plenty of fake gold coins to create a great effect, with added skulls & skeletons for older kids.

Allow your guests time to make or hire costumes by sending invitations a few weeks in advance. Provide a small selection of spare pirate clothes so everyone gets a chance to dress up.

A costumed pirate entertainer or themed soft play, such as a pirate bouncy castle, work well for all but the youngest kids. Offer more gentle story-telling or simple cartoon film shows for pre-schoolers. Play sea shanties and/or Pirates of the Caribbean-style soundtracks as background music.

Plan a mix of high and low energy activities from a menu including, for example, dressing up, face-painting, arts & crafts, physical games, bouncy castle and a treasure hunt.

The best pirate parties tend to be held in local community halls rather than at home. Here are ten reasons why.

You don’t need to serve authentic dishes from the early 18th century. Probably best you avoid roast turtle and similar delicacies. Instead, be inventive and get your kids to come up with give good piraty names for popular party food. Deadmen’s Fingers (fish fingers), Blackbeard Burgers with blood sauce, Pirate Pizza, Caribbean Cup Cakes, Graveyard Grog and so on.

You’ll need maps, treasure chest and lots of gold (chocolate) coins as a bare minimum. How challenging you make the hunt depends on the ages of the kids. Just make sure everyone goes away with plenty of swag in their goody bag.

With these tips you can have a great Pirate party and lots of treasure hunting fun!