Pirates – Past and Present 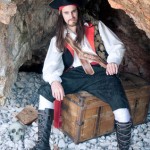 The roots of the word ‘piracy’ come from the ancient greek word ‘peiraomais’, meaning ‘attempt’. In the sense of an attempt to rob for brigand and then to the Latin ‘pirata’, where we get the modern English word ‘pirate’. In essence,it’s an act of robbery, committed on the high seas, flourishing in waters where law and order is absent and policing ineffective.

Piracy has existed since sea travel became possible.Initially, oars were used to power galleys during the Greek and Roman eras. Fast-sailing ships operated during the infamous ‘Golden Age of Piracy’ in the 18th century. Today speedboats and automatic rifles characterize the modern pirate preying on supertankers, container ships and leisure craft.

A Brief History of Piracy 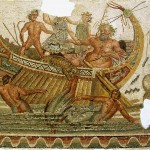 The first recorded pirates were the ‘Lukka’, a group of sea raiders who based themselves on the Mediterranean shores of Lycia in Asia Minor, now Turkey, in the 14th century BC. They led regular
attacks on Ancient Egypt. Pirates operating from their base in Crete were increasingly ravaging Greek city states by the end of the 10th century BC.

Until it was suppressed around 75BC piracy was ever-present in the Mediterranean during the early years of the Roman Empire. Julius Caesar was briefly captured by Cilician pirates sailing from Southern
Turkey. However, it soon began to flourish again in Aegean and Adriatic waters after the collapse of the Roman Empire in the 5th century AD. Piracy then ebbed and flowed in line with the rise and fall of the Byzantine empire.

European sea trade began to flourish spectacularly from the 11th century and acts of piracy became more ever more complex in operation. Norse and Vikings raiders, Baltic pirates and Barbary Corsairs
wreaked havoc in and around Northern European and Mediterranean waters.

By the early 16th century Spain had created a vast empire in the Americas gaining access to huge deposits of gold and silver. The Spanish treasure fleets became a magnet for pirates, notably English, French and Dutch, with little distinction between so-called privateers acting legitimately as enemy ships in times of war and those engaged in naked acts of piracy. By the middle of the 16th century England regarded piracy virtually as a state policy in its desire to plunder Spain’s empire.

The “Golden Age of Piracy”

The “Golden Age of Piracy” is generally accepted to have spanned the period from the second half of the 17th century to the early part of the 18th century. From the 1650s mainly French and English buccaneers, operating from bases such as Jamaica and Tortuga, attacked Spanish shipping and colonies. These attacks, on the ‘Spanish Main’, took place in the Caribbean and the Eastern Pacific. Arguably the most successful of these pirates was Henry Morgan who, having ravaged the region for over a decade, was knighted, eventually becoming deputy Governor of Jamaica.

From the 1690s pirates such as Henry Every, Thomas Tew and William Kidd embarked on long-distance voyages from the Caribbean and the Americas to plunder shipping in the Indian Ocean and Red Sea. At the end of the War of the Spanish Succession in 1713 piracy increased in the Caribbean, along the American eastern seaboard, the West African coast, and in the Indian Ocean. Famous pirates such as Blackbeard, “Black Bart” Roberts and “Calico” Jack Rackham briefly flourished until a large scale international attack on piracy took place in the 1720s.

The beginning of the South and South American wars of liberation in the early 1800s and the end of the Napoleonic Wars in Europe in 1815 saw many sailors return to piracy, particularly in the Caribbean, until US and British authorities again took action to suppress this new wave of pirates. At the same time a new pirate empire arose in China, led by Cheng Yih and boasting more than 600 pirate junks and 30,000 men. It prospered until the tightening of controls against it by the Chinese emperor and their European trading partners.

For the last 200 years piracy has maintained a global presence but on a relatively small scale. However, since the 1990s attacks on shipping have increased substantially. Notable hotspots are the waters of Somalia, Indonesia, India, Sri Lanka, Burma, West Africa, the Philipines, Brazil, Columbia and Venezuala. Contributory factors are the end of the Cold War, the rise in international terrorism and a shift in the way international waters are policed. However, since 2011 attacks by pirates off the coast of Somalia have significantly reduced as the international community have sought greater cooperation in tackling piracy worldwide.