Leading the Pirate Attack experience to all parts of the country Captain Rocky Cliff has finally been sent to Coventry. The call came from the Joseph Cash Primary School, one of the West Midland city’s most popular schools, where all the year two classes were planning a pirate day at the end of the summer term. 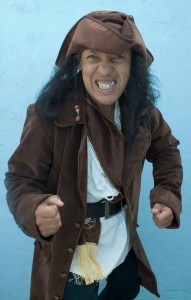 Rocky Cliff led the children through a fun-filled day of piratical games and activities, especially delighting the children when he put their own teachers in the pirate pillory. They learned about real pirates and those invented for books and films. Games included skittles and quoits, walk the plank and a treasure hunt.

Rachel Burnside, assistant head teacher, said “I was really impressed with the level of organisation leading up to the workshop. The children and staff absolutely loved everything about the day and were so excited when they saw a real pirate in school!”

Ben Clarke, Year 2 teacher, commented: “We had an amazing day in year 2 learning all about pirates and playing pirate games. Captain Rocky Cliff was brilliant with the kids, engaging, funny and clear. The pirate history was so interesting I think the adults learned something! After the pirate history we walked the plank, played pirate games and found some treasure! Captain Cliff had decorated the hall very nicely and had lots of props to look at. I couldn’t recommend him enough for a pirate learning day at a school.”

Captain Rocky Cliff from Pirate Attack has been visiting towns and cities across the country since launching a schools’ workshop programme earlier this year.

For further information about these workshops, which are designed as a high impact introduction to Pirates as a topic or an entertaining finale, go to our schools’ page.